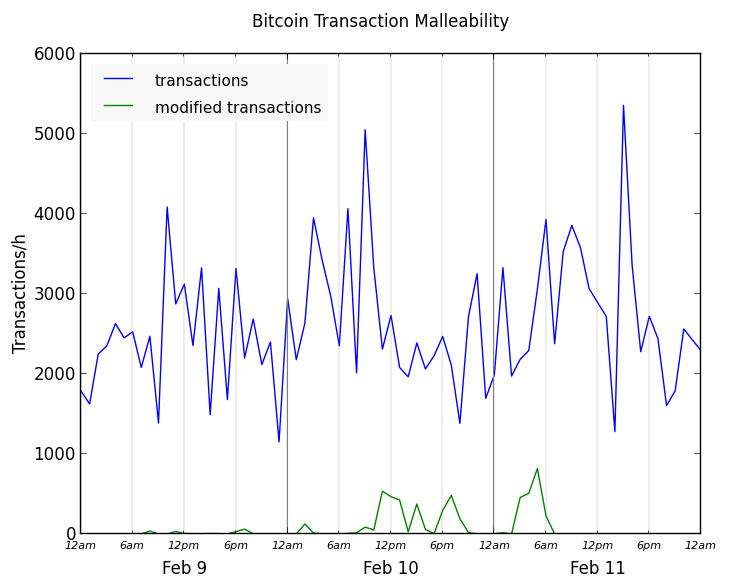 Last week’s transaction malleability scare made international headlines, once again bringing Bitcoin into the mainstream news. It was the cited cause of the total collapse of Silk Road 2.0, the glitch that forced both Mt.Gox and Bitstamp to freeze user accounts for a few days, and it put massive downward pressure on global Bitcoin value. But how serious was it really? According to noted cryptocurrency analyst Ken Shirriff, the data tells a story of an intense, yet relatively short-lived attack.

The attack started off affecting a fairly small number of transactions on Feb 9. The malleability attack itself appears to have started in block 284980 (Feb 9, 8:12 PST), which contains 36 modified transactions. Since the number of affected transactions in this block and following blocks was small, I wonder if this was a test phase for the attack.

The attack really took off the morning of February 10. At the peak, up to 25% of Bitcoin transactions were modified.”

In the same report, Shirriff debunks the idea that the recent Mt.Gox problems could be related to this attack.

One puzzle is that Mt.Gox announced their difficulties on Feb 7, and then explained Feb 10 that they were stopping withdrawals due to a malleability attack. Since [the attack] didn’t start until Feb 9, [it] can’t be responsible for the Feb. 7 problems. One possibility is there was a different type of malleability attack that affected Mt.Gox. It would be interesting to get the hash for one of the affected transactions from before Feb 7, to see what was going on.”

More on the causes of the attack to come as the story develops.