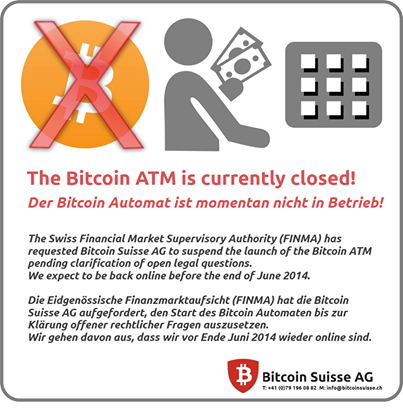 Switzerland-based bitcoin brokerage and ATM operator Bitcoin Suisse AG was forced to halt plans to launch a new machine in Zurich today after the country’s financial authority, the Swiss Financial Market Supervisory Authority (FINMA), requested a review of the legal issues related to its proposed services.

Bitcoin Suisse already has a handful of operational bitcoin ATMs in the country, and voluntarily ceased operations at these locations at FINMA’s request. Other planned ATM launches by the company are also postponed until the issue is resolved.

While a troubling precedent for Swiss bitcoin companies, Bitcoin Suisse said its legal team was working with FINMA to come to a resolution. According to a Reddit post by Bitcoin Suisse, the company does not expect the “open legal questions” to remain unresolved for very long, noting: “We expect to be back online before the end of June 2014.”

It’s not known exactly why FINMA requested the cancellation, although one likely issue is the recent report by Swiss legislators indicating that wages paid in bitcoin might violate the country’s labor laws. Another theory, proposed by Bitcoin Association Switzerland president Luzius Meisser, is that the technologically conservative FINMA is simply being “extra-cautious when it comes to bitcoin.”

The FINMA action does not impact other bitcoin ATMs installed, but not operated by, Bitcoin Suisse.