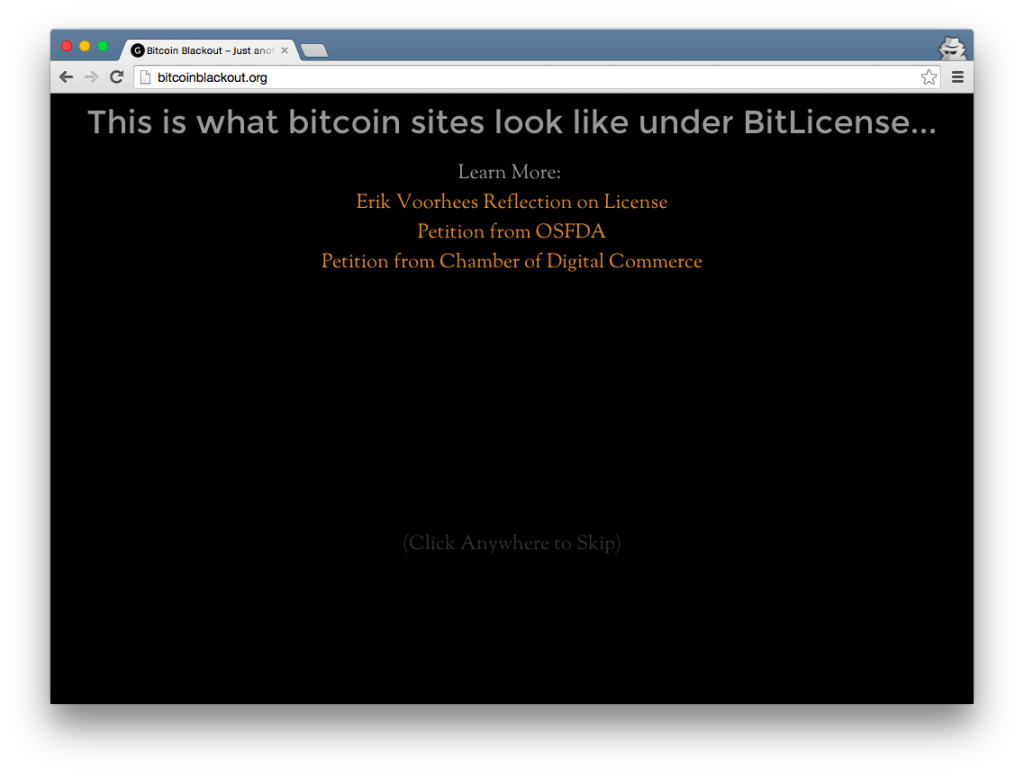 Few recent developments in the bitcoin world have been as controversial as the proposed New York Department of Financial Services (NYDFS) “BitLicense” plan. The regulation would seek to place standard bank-like controls on bitcoin-related businesses in New York, including a range of know-your-customer rules and anti-money laundering controls. With increased anonymity and a lack of regulation widely seen by many as vital features of a cryptocurrency-based economy, the proposed NYDFS rules have caused significant concern in some corners of the bitcoin community. Even though the rules are limited to companies doing certain kinds of bitcoin business within the state’s jurisdiction, the greater concern is the precedent the rules could set for other state and national laws.

To push back against the BitLicense, a group fronted by bitcoin news website Coin Fire is taking a page from the 2012 “Internet Blackout” online protests against SOPA and PIPA. The “Bitcoin Blackout” campaign is planned for August 20, and will essentially create a click-through javascript page before users can view their intended content.

Given the limited timeframe for outreach and the niche nature of the issue, it’s something of a gamble that the campaign will gain much traction. The Internet Blackout was a huge issue at the national level, and the protest against it was driven by major sites like Google and Wikipedia. In this case, a state-level regulation of a relatively tiny industry may still gain some attention and have some impact, but the move appears mostly symbolic. Additionally, the NYDFS regulations have been largely praised by Wall Street-focused bitcoin companies, with many already in compliance with the stricter New York financial services rules long before the BitLicense was even proposed earlier this year.

The Bitcoin Blackout protest page calls the BitLicense rules “draconian,” but offers no specific changes or issues that the protest seeks to solve. In fact, it says little about the core issues with the proposed regulations at all. Additionally, the final version of the BitLicense rules have yet to be released, as the draft version is still in the “public comment” phase of its release.