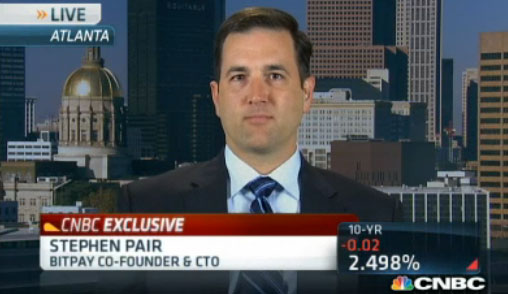 Although it has been hailed by many as an disruptive alternative to today’s fee-prone banking and credit card systems, there is a growing realization in the mainstream financial world that bitcoin’s innovations may actually be the solution to some of those industries’ biggest problems. Speaking on CNBC yesterday, BitPay CTO Stephen Pair suggested that the most likely long-term result of bitcoin’s introduction to the mainstream will be companies like Visa and Mastercard adopting the technology.

Speaking via live feed from BitPay’s come city of Atlanta, Pair said that bitcoin’s design solves one of largest issues facing credit card companies today: Fraud. Given bitcoin’s one-way transactions, transactions validated by the entire network and the near-impossibility of double-spending funds, fraud is considerably more difficult than it is with the current credit-card system. Given that the majority of credit card fees exist to offset fraud costs, the credit card industry has every reason to incorporate bitcoin’s innovations.

As Pair noted, the credit card system was originally designed in the 1950s. Pair said his company believes that “If and when MasterCard and Visa get into the space, that they would actually leverage the bitcoin technology rather than directly compete with it.” With digital merchants such as PayPal already considering full bitcoin adoption, and companies like Circle and Xapo moving closer to the credit card industry, Pair’s assertions appear to be well-founded.

Pair also said that BitPay is continuing to grow rapidly, adding between 500 and 1,000 new merchants per week. He said that mainstream adoption will happen “sooner than people imagine today,” and hinted that his company was seeing a timeline of “two to three years” from merchant projections.