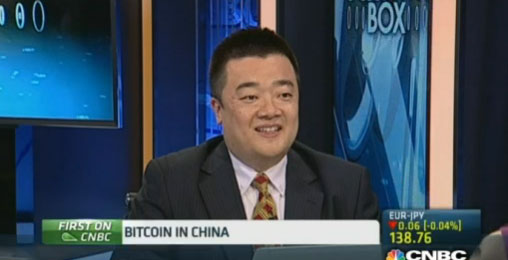 BTC China CEO Bobby Lee has been at the front lines of the People’s Bank of China’s (PBoC) efforts to suppress bitcoin right from the start. Through it all, he’s managed to keep his exchange open even as his competition has scaled back their operations, changed their business models or closed completely under PBoC pressure. Speaking with CNBC yesterday, Lee shared his still-optimistic perspective on the current situation in China.

“Bitcoin is legal [in China],” Lee explained. “It’s been recognized by the central bank. … Back in December of last year, [the PBoC] stated that bitcoin is legitimate. They would allow people to buy and sell it, because it’s just a virtual commodity. By having made that public statement, it’s hard for them to go back and declare it illegal after just a few months.”

Of course, this doesn’t mean that the PBoC has made it easy for bitcoin companies. As Lee noted, the PBoC has “disallowed bank and payment companies from processing payments at exchanges,” creating an informal ban from the banking system even if bitcoin itself is still technically legal.

“They have disallowed banks to formally process payment for bitcoin exchanges,” Lee said. “And they’ve done this in a sort of underhanded way, without being explicit about it. … [This] is how business is done in China. Sometimes there are policies that are not exactly written, so they use ‘verbal regulation’ to adjust it.””

Although China’s past actions have had huge impacts on the price of bitcoin, Lee didn’t seem particularly concerned about the PBoC’s future plans. “At this point, there’s not much left for [the central bank] to do,” he told CNBC. “If prices go up again, it will be less for the central bank to control in China.”

In Lee’s view, China’s central bank is threatened by the potential of a completely deregulated, decentralized form of money. “It’s much like gold. No country or government owns and controls all of the gold supply or the gold value. It’s a free-floating thing.”

Lee explained that the PBoC policy has effectively forced his exchange out of the banking system, forcing BTC China to use third-party, voucher-based payment systems. But he’s still a believer in bitcoin, even with the PBoC challenges and the current price slump.

“Those of us in the industry are still very bullish on bitcoin, because it is a global phenomenon,” he told CNBC. “The price has just come down a little bit as a correction in the last six months, but we’re still going to see gains this year and in the coming years.”