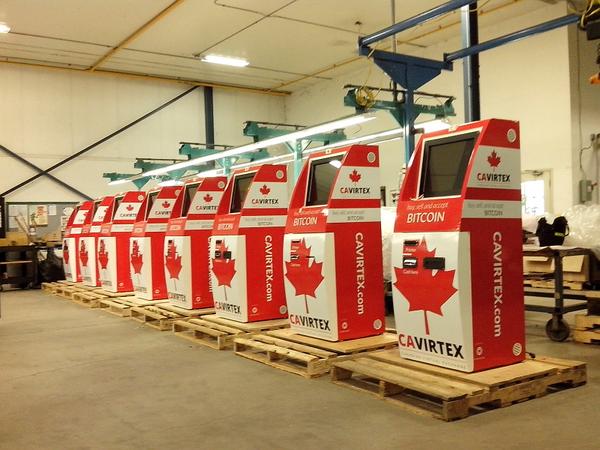 The Canadian Virtual Exchange, better known as CAVIRTEX, is nearing the launch of its long-anticipated bitcoin ATM network. The Calgary-based exchange posted an image to Twitter today showing eight custom-designed, Canada-themed machines. According to a post from the official CAVIRTEX account on Reddit, there are ten ATMs launching across Canada next month. The company has yet to announce the locations of the ATMs, although it did confirm via Twitter that at least one is destined to remain in Ottawa.

That should save on shipping costs, as the ATMs are manufactured by Ottawa-based maker BitAccess. BitAccess is a rising star in the bitcoin industry thanks to its entrance into the Y Combinator startup accelerator program last month. The company already has 45 active bitcoin ATMs in various locations in North America, and the machines are said to strike a good balance between ease of use and AML/KYC requirements. The devices are two-way ATMs, allowing users to both withdraw and deposit Canadian dollars.

It’s not known precisely when the ATMs will launch, although it is likely that each ATM will have a dedicated launch event. CAVIRTEX has offered few hints about where the ATMs will end up beyond noting they will be placed in “high-traffic locations.”