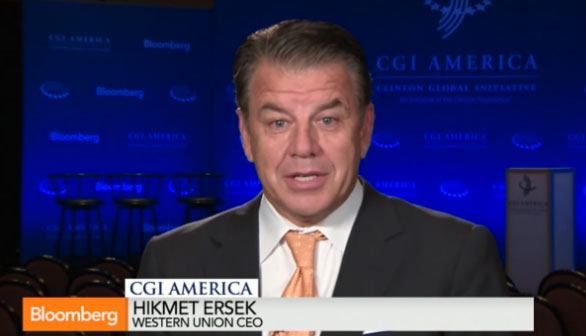 In an interview yesterday with Bloomberg TV’s Street Smart, Western Union CEO Hikmet Ersek said his company would be open to implementing some form of bitcoin integration if the cryptocurrency is approved by regulatory authorities.

When asked about how seriously Western Union viewed bitcoin as a threat to their business model, Ersek didn’t appear to see it a competition at all. He noted that Western Union already pays out in 121 regional currencies, and that adding one more wouldn’t be an issue. “Once bitcoin should be regulated by the regulator as a proper currency, why should we not also use bitcoin?”

Ersek noted that the biggest issue for Western Union to adopt bitcoin was regulation. “It is not regulated as a currency,” he told Street Smart. “We are a very regulated industry. If bitcoin is regulated and the customer wants that, I mean, why not?”

Western Union already faces stiff competition from other international currency transfer services, such as PayPal, and it is widely rumored that Google, Amazon and Facebook will be making concerted efforts to break into the market in the coming year. Should those competitors gain serious ground, Western Union might be forced to adopt a purely digital money transfer system like bitcoin just to protect its market share.

That said, Ersek was clearly skeptical about how bitcoin would fit into Western Union’s business model. Ersek said that his company works with currencies regulated by central banks, then noted “Bitcoin does not have that.” He explained that Western Union works solely in a “regulated environment,” and would be reluctant to experiment outside of it. “When the reserve bank issues bitcoin, and when it is regulated, we would be more than happy.”