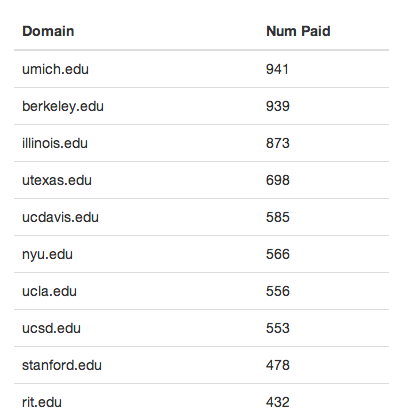 Earlier this month, bitcoin services provider Coinbase announced a plan to give $10 worth of BTC to every college student opening a new account. Not surprisingly, giving away free money to college students sparked considerable interest on campuses across the nation, resulting in 20,000 student sign ups. Given the high cost of effective advertising in the college-age demographic, Coinbase’s move has gained them a huge market share of likely early adopters for an extremely reasonable $200,000 price tag. Coinbase’s top ten college signups from the past two weeks.

The move was inspired by the MIT Bitcoin Project, focusing on increasing bitcoin adoption by young, tech-savvy students. A similar strategy worked for helping to establish Facebook, which went from a somewhat obscure, invitation-only college social network to a tech behemoth in less than a decade. While many of those students will likely cash out their bitcoin, at least some will use their newly established accounts to pay each other, buy goods online and generally experiment with bitcoin as a payment system. That kind of activity is important for building trust and user experience in the bitcoin network.

Today’s reveal may also give another insight into bitcoin’s recent price rally. While $200,000 is only around 328 BTC, and a tiny fraction of the daily trading volume, 20,000 new bitcoin accounts becoming active is not insignificant. If even a small amount of those students decide to buy small amounts of additional bitcoin for their Coinbase accounts, overall demand and price could rise considerably. Likewise, Coinbase itself may be anticipating a huge growth in new signups in coming months, and could buying up supplies of BTC to respond to a potential flood of new accounts.

Although the current levels of adoption are relatively small, with even the not-exactly-small University of Michigan (43,000 students) yet to cross 1,000 signups, demand going into the Fall 2014 semester is likely to be considerable. With college only becoming more expensive, and the overall state of the economy likely to remain stagnant, $10 worth of bitcoin isn’t likely to be overlooked by many students.