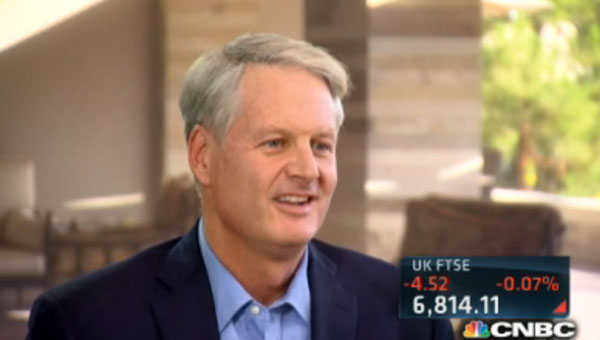 A screenshot of the CNBC interview with eBay CEO John Donahoe

It’s not exactly a secret that eBay CEO John Donahoe has a soft spot for bitcoin. While he has been coy about announcing any concrete plans to formally integrate eBay and PayPal with a bitcoin wallet, he has made a variety of statements over the past six months indicating that such a move is likely.

Speaking with CNBC today, Donahoe took his crypto-teasing to a new level, stating that PayPal will eventually have no choice but to integrate digital currencies.

I think there’s no doubt digital currency is going to play an important role going forward, and at PayPal, we’re going to have to integrate digital currencies into our wallet. … I can’t give a specific time, but I think you’ll see bitcoin used in different use cases. Whether it’s a peer-to-peer use case, a cross-border transaction – someone’s sending currency to someone else, and over time, you’ll start to see it with some merchants accepting bitcoin.”

True to form, Donahoe declined to give a timeline for this integration. Given the relatively small volume of bitcoin transactions at the moment, and the expectations in Silicon Valley that bitcoin may well be on the verge of a massive expansion, eBay may simply be waiting for the likely chaos and volatility of the next few quarters to subside before launching its own bitcoin options. Given PayPal’s huge presence in the world of digital payments, it’s possible that the company is even building its own system for handling bitcoin, rather than relying on a third party such as Coinbase or BitPay, to process payments.

Donahoe did confirm that he owned some bitcoin personally, and was most interested in it as a payment technology rather than as an investment.