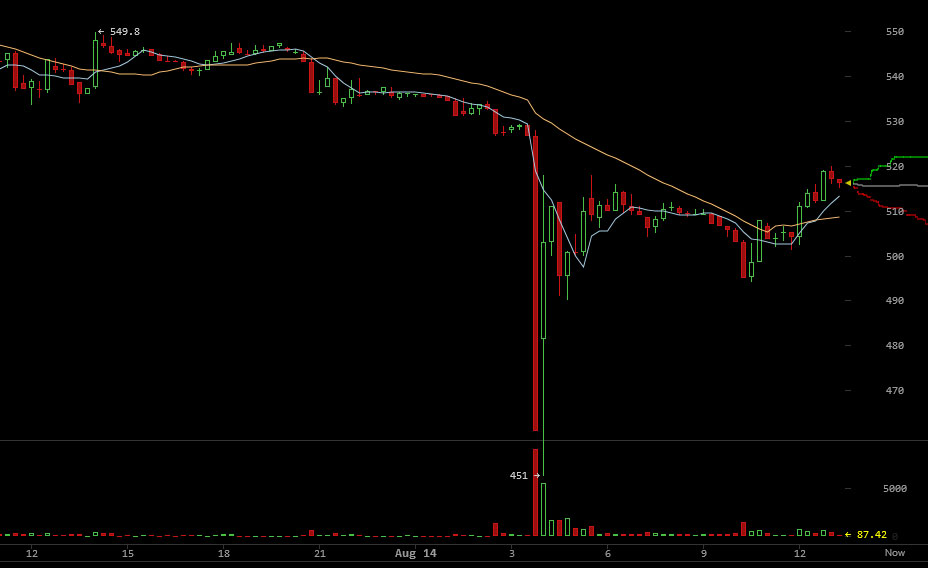 Is today’s price crash solely the result of a new bitcoin derivates market? While most of the Western bitcoin trading world was asleep this morning, the bitcoin market was inexplicably crashing. Around 3 a.m. EST, a series of largely automated events on BitFinex caused the price to collapse from the $525 range to a staggering $451. While the drop lasted for a matter of seconds, the price has been struggling back up for most of the day, rattling the nerves of many traders and observers. While there’s nothing new about dramatic price swings in the bitcoin market, generally speaking the reasons for these aren’t difficult to understand: Mt.Gox collapses, China’s central bank bans bitcoin-oriented accounts, a major retailer adopts bitcoin payments and so forth.

Today, however, nothing in particular seems to be moving the market. And that is causing both concern and speculation about the most likely explanation: A flash crash caused by automated trading bots in the BitFinex bitcoin derivatives system.

Derivatives markets can be tricky things to understand, but in this case the culprit seems to be BitFinex’s margin trading system. Unlike the traditional buying and selling most non-traders can follow easily, margin-based trades involve “borrowing” bitcoin from someone else to gamble on price movements. If bitcoin was borrowed at $530 and then the price went down to $510, for instance, the margin trader can re-buy the coin at the new price and pocket the $20 difference as profit. If the price goes up, as many margin-traders believed it would, the traders can keep the profits in much the same way. Because these bets are funded by margin accounts, rather than the assets themselves, it’s possible “leverage” them far more than the actual balance, allowing a $50 balance to fund bets of $100 at 2X leverage.

Most margin-trading systems, however, have automated systems that will automatically “call” a bet should a certain threshold be passed. And that’s what appears to have happened this morning. Some unknown number was passed, and the system began making margin calls. The systems are set up to ensure that the exchange itself always has the correct level of liquidity for trading. This means automated selling of bitcoin, using deposits in those highly leveraged margin accounts. Compounding the issue, BitFinex allows margin accounts to be funded in BTC, putting even more bitcoin on the market, further driving down the price. This causes a cascade effect, where even more margin calls and price drops take place.

When it all goes wrong in a mostly automated system, you get a “flash crash.” That’s what happened today. Such crashes are likely to occur again as the completely unregulated bitcoin derivatives market slowly matures.

Here’s one YouTube video of this morning’s crash happening in real time. As you can see, it is happening far too fast to be driven by human activity. It is a completely automated event, divorced entirely from human estimates of bitcoin’s value. It’s an artifact of the derivatives market.

Thankfully, the actual human-traded system seems to see the fundamental price of bitcoin very differently. The price has largely recovered from this morning’s event, trading at around $520 at the time of writing.

Hat tip to Crypto Coin News and CoinPrices.io for the analysis.