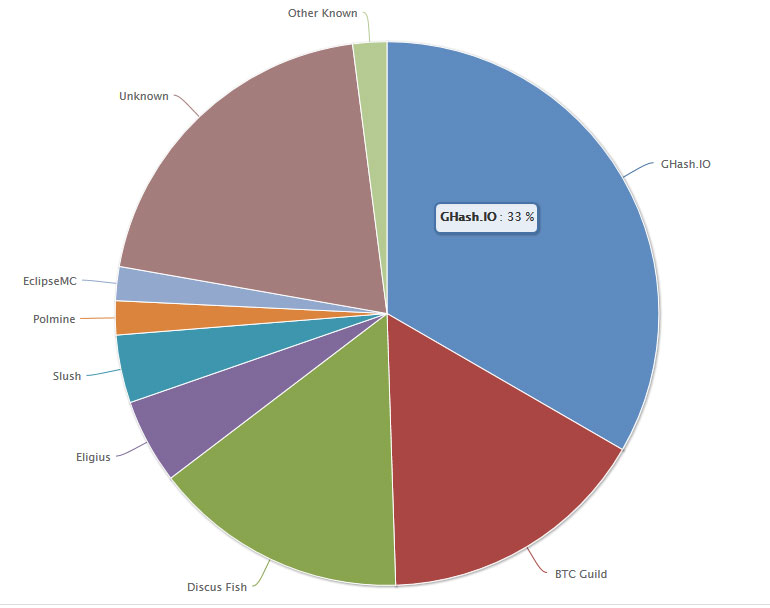 Miners flee GHash.io after near 51% scenario The possible 51% scenario crisis over the weekend has been averted, with bitcoin miners leaving GHash.io for other pools. GHash.io is still the most popular mining pool, with 33% of the total hashrate, but the problematic scenario surrounding any one pool gaining the majority of the network hashing power has been averted.

While there was never any serious concern that GHash.io would launch a so-called “51% attack,” the possible centralization of bitcoin’s distributed nature provoked plenty of lively debate over the weekend. The biggest point of concern was a possible negative effect on bitcoin’s still-recovering price, and that alone appears to have motivated many miners to switch to alternate pools.

On Friday, GHash.io came within a few percentage points of controlling the majority of the hashing power of the bitcoin network. For most of the weekend, the GHash.io pool was well above 45% of the total hashrate, and for a few hours went as high as 47%. This prompted a storm of threads on popular bitcoin discussion sites, such as Reddit and BitcoinTalk, warning of a potential “51% attack” scenario that could potentially undermine the entire bitcoin network. By Sunday, however, GHash.io’s percentage share began to drop as miners began to point their hardware to other pools.

This is not the first time a popular mining pool has approached the 51% line. GHash.io had a similar close call in January, and BTC Guild made moves to actively reduce its pool size last year. In some ways, GHash.io is a victim of its own success in this scenario. The pool already has a highly developed, user-friendly system, and does not charge a fee. The larger the pool, the more likely it is that the pool will find the next block and receive the next 25 BTC reward, thus making the pool more profitable for the participating miners. Although many have suggested miners switch to alternative pools, such as a distributed system like P2Pool, the loss of revenue through fees and the lack of other features have proven to be discouraging.

There is still no solution for the 51% scenario in the Bitcoin Core code, although developer Gavin Andresen has suggested that a “Not To Be Used Except In Case of Emergency” exists for such a situation.