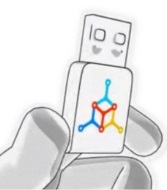 Last month, cryptocurrency wallet-software provider Mycelium introduced Entropy, an open-source, multi-signature enabled USB-stick based paper wallet generator. The company had already tested a limited batch of the devices in a closed beta, and was taking to popular crowd-funding website Indiegogo to raise the $20,000 needed to produce the second batch on a more commercial scale. That crowdfunding campaign has now ended, and even Mycelium was surprised at the demand. The Entropy project raised more than $31,000 in just over a month.

Mycelium Community Manager Dmitry “Rassah” Murashchik took to Reddit shortly after the funding campaign closed to announce the results. Murashchik said that over 700 Entropy units have been pre-ordered, as well as 220 t-shirts for supporters who donated over $50.

“Thank you VERY much for your help!,” Murashchik said in the post. “Most of the orders came from big obvious places, like USA, UK, Europe, Canada, and Australia, but we’ve even had orders from as far as Chile, Korea, Turkey, and UAE. Bitcoin is truly global.”

According to the Reddit post, Mycelium will be ordering the first run of the devices this week. The Entropy software is currently undergoing testing, adding in HD wallet seed support, Litecoin support and a fresh round of security testing. Murashchik noted that the packaging of the devices will be “somewhat plain” in order to keep shipping time and costs down. Production time should be relatively fast, as Entropy’s software will run on any USB stick. The company plans to release the open-source firmware after the Entropy devices have been delivered to Indiegogo funders. The company plans to use Amazon for order fulfillment in the U.S., Europe and Asia.