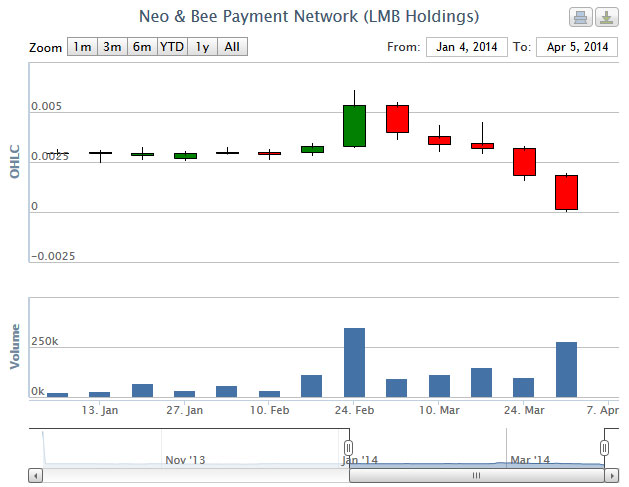 On March 28, bitcoin-based stock exchange Havelock Investments froze trading on Neo & Bee (NEOBEE) shares, citing a “high possibility of questionable trading activity.” Shortly thereafter, it became clear that rumors of Neo & Bee’s financial troubles were founded, and were later confirmed by CEO Danny Brewster. With the company shuttered in Cyprus and facing allegations of fraud, even the best case scenario for Neo & Bee is looking grim.

Havelock, meanwhile, had a toxic, frozen asset sitting on its exchange at a clearly overvalued price. Yesterday, the company posted this announcement.

On March 28, 2014 Havelock Investments halted trading of the NEOBEE Fund; Havelock Investments has yet to receive any formal information in regards to the questionable trading activity on the LMB share platform website. We have not received any formal information on the current situation at LMB Holdings. Due to those factors we have decided that the unit holders on the NEOBEE Fund should no longer be suspended from trading their units. The Fund will now be designated as NEOBEEQ to reflect the uncertainty of the future of LMB Holdings – NEO BEE Ltd. Financial information on the status of the company has not been released. The units of this Fund will continue to trade even if the company will file for bankruptcy. We will continue to update you if any information is provided to us. Trading will resume today at 5:00 PM EST

At 5 p.m., EST, trading resumed. Immediately, the site was flooded with NEOBEE shareholders desperate to salvage some of their investment. The price, which had soared as high as 0.005 only a month ago and been frozen at about 0.002 BTC ($0.90) last week, almost instantly crashed to a painful 0.0001 BTC ($0.05). The shares, which did not represent equity in the company, but merely fractions of future profits, are not expected to rally.

Thus far, there has been no comment on the situation by anyone involved with Neo & Bee.