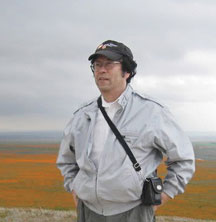 For all the technological and economic innovations that Bitcoin has inspired, almost nothing is known about the man who created it. The idea behind Bitcoin started with a 2008 paper written by Satoshi Nakamoto, but the creator of cryptocurrency has been completely silent ever since. In fact, many people in the Bitcoin community have theorized that Nakamoto either died shortly after writing the paper, or perhaps never existed at all, and was likely a creation of the early core Bitcoin developers.

According to Newsweek, however, the 64-year-old Satoshi Nakamoto is alive and well, and living in Temple City, California.

He’s wearing a rumpled T-shirt, old blue jeans and white gym socks, without shoes, like he has left the house in a hurry. His hair is unkempt, and he has the thousand-mile stare of someone who has gone weeks without sleep. … He stands not with defiance, but with the slackness of a person who has waged battle for a long time and now faces a grave loss.

After a two-month investigation, reporter Leah McGrath Goodman approached Nakamoto at his house. Perhaps not surprisingly, he wanted no part of her story.

I am no longer involved in that and I cannot discuss it,” he says, dismissing all further queries with a swat of his left hand. “It’s been turned over to other people. They are in charge of it now. I no longer have any connection.”

Then he called the cops on her.

This didn’t stop Goodman from creating an interesting portrait of Bitcoin’s father. He was born in Beppu, Japan, and moved with his family to the U.S. when he was ten. He is the eldest of three brothers. He holds a degree in physics from California State Polytechnic University, and shortly after graduating he changed his name to “Dorian Prentice Satoshi Nakamoto.” He worked in computer engineering, often taking on classified work for the military on the side. He’s a naturalized U.S. citizen, and passionate about model trains. He drives a silver Toyota Corolla CE. He shares a house with his 93-year-old mother.

For a man who has been long considered something between a myth and ghost, even to Bitcoin insiders, this is a treasure trove of new information.

And, according to his brother Arthur Nakamoto, Satoshi is also a tough nut to crack.

My brother is an asshole. What you don’t know about him is that he’s worked on classified stuff. His life was a complete blank for a while. You’re not going to be able to get to him. He’ll deny everything. He’ll never admit to starting Bitcoin.”