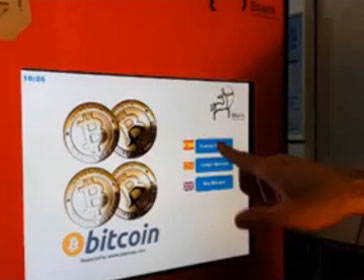 Report: 100 Bitcoin ATMs coming to Spain over next three months According to a report published on Cryptocoins News, Spain will go from having one lone Bitcoin ATM in a Barcelona mall to having over 100 throughout the country. The ambitious plan is collaboration between ATM manufacturer PayMaQ and distributor Bbank, who aim to take advantage of Spain’s current lack of Bitcoin regulation. Under Spain’s current rules, Bitcoin ATMs are treated as vending machines.

The report states that 40 Bitcoin ATMs are currently preparing to ship to malls in Madrid, Valencia and Barcelona. The machines are said to charge a 3% transaction fee. The machines currently accept bills ranging in value from 20€ to 500€.

To use their Bitcoin ATMs, you need an account in Bbank’s web page and be identified with your Spanish ID card or your passport. If you do not have an account in their web, you will be able to create it at the moment in the machine, which has ID cards reader and a camera. In their web page, you will have your own Bitcoin wallet.

Bitcoin ATMs have been popping up all over the world in recent weeks, and many companies have announced similarly ambitious plans for the U.S., London and the European Union. According to the Cryptocoins News story, PayMaQ and Bbank plan on expanding their ATM system into other Spanish-speaking countries, such as financially unstable Argentina, in coming months.