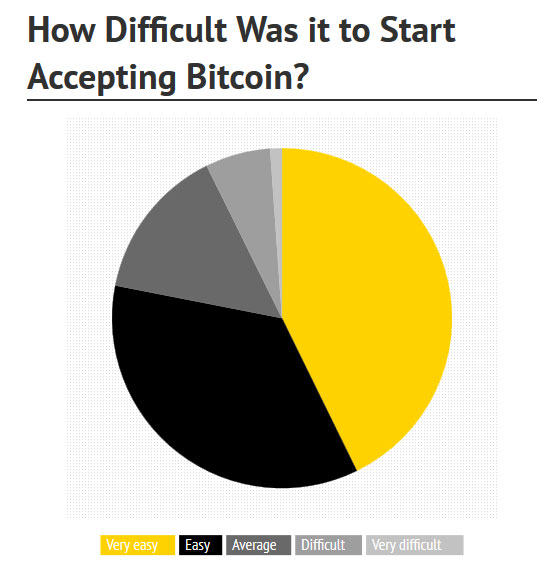 Report: Bitcoin boosts sales by 10% for nearly a quarter of businesses CoinDesk published a new batch of results from their March 17 merchant survey about the impact of bitcoin adoption on their businesses. Today’s update noted that bitcoin adoption seems to have had at least a mildly positive impact on their sales.

In total, our survey found that 24.5% – or roughly one-fourth – of respondents indicated that more than 10% of monthly sales are attributable to bitcoin purchases. It’s important to note that an unknown number of these respondents are likely bitcoin-only businesses, but that we do know that some merchants are achieving similar results even when accepting fiat currency. The majority of merchants (56%), however, say that bitcoin is attributable to 0% to 2% of their total monthly sales.

The survey also reports that and overwhelming majority of businesses, nearly 80%, found bitcoin adoption was “easy,” while a slim minority of around 8% found it difficult. Around 15% found accepting bitcoin to be of “average” difficulty.

Those adoption numbers may bear some relation to the services merchants use to handle their bitcoin payments. If so, BitPay and Coinbase seem to be doing their jobs relatively well.

Our survey also sought to examine which business partners are most popular for merchants, and revealed BitPay to be the clear frontrunner in the market, capturing 44% of the vote. Coinbase came in second with 36% of the total vote, while the standard-issue Bitcoin-QT wallet came in third in terms of total responses.

The first round of survey results delves into the motivations behind merchant bitcoin adoption, and was published earlier this week. Part three is expected to be published in the next few days.