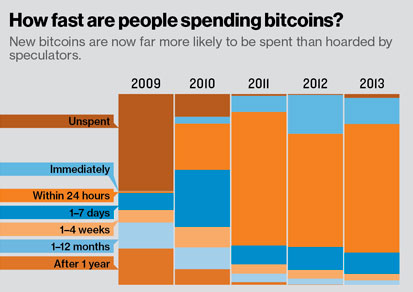 Report: Bitcoins more likely to be spent than hoarded According to a recent infographic report in the MIT Technology Review, “hoarded” Bitcoins account for only a tiny fraction of the overall volume of the currency. The overwhelming majority of newly mined coins are spent within 24 hours, the report says, casting doubt on the relevance of the 2012 reports claiming that 78% of the Bitcoin was being “stashed under digital mattresses.”

Coindesk examined the infographic in depth, and concluded that:

Such findings provide evidence that bitcoin is evolving as a currency, and that while far from mass adoption, liquidity is on the rise in the system.

The infographic does hint that long-term Bitcoin storage is rising, but at only a fraction of the rate seen in 2010.

The report, compiled by noted analyst Sarah Meiklejohn, pulls data from a variety of of sources, including Bitcoin Charts, Blockchain and Mt.Gox.