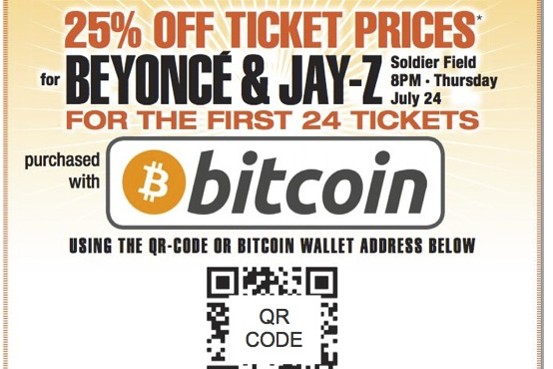 It’s no secret that print publications are struggling to remain relevant in an era of mobile-optimized websites, multimedia and social-networking based services like Twitter. But just because you’re struggling doesn’t mean you can’t innovate. The Chicago Sun-Times recently announced that it would be experimenting with a new ad allowing users to directly purchase tickets to an upcoming Beyonce and Jay-Z concert using bitcoin. Users simply need to scan a QR code to launch the payment portal.

Speaking with the Wall Street Journal about the promotion, Josh Metnick of Sun-Times parent company Wrapports said: “As far as any of us know, this is the first time in the history of newsprint where direct-to-newspaper ecommerce is being enabled.”

Although QR codes have become commonplace in print media, and in ads in particular, the Sun-Times ad is interesting in part because it represents an attempt to circumvent traditional middlemen. Both Blockchain and Coinbase will power the payment processing side of the promotion, with Chicago-based ticket broker Gold Coast Tickets handling the non-bitcoin side of the process. While clearly promotional in nature, the move does effectively cut payment processors like Visa and MasterCard completely out of the equation. With ticket resellers, venue-based ticket fees and other costs one major reason for the high-price of large events, this could signal the start of a new trend of direct-to-artist payment (or at least direct-to-vendor payment) for the entertainment industry.

While all this sounds like good news for the promoters, there are some advantages to using bitcoin for purchasers. The first two-dozen bitcoin-using buyers will also receive a 25% discount on their ticket price, and CoinDesk is reporting that later bitcoin purchases will see a 10% discount. Ticket prices for the event currently range from $135 to $1875.