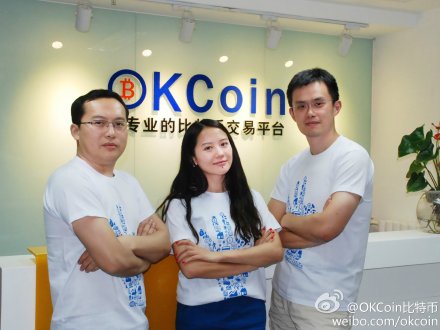 Over the course of 2013, Changpeng Zhao helped Blockchain grow from a small startup to one of the biggest names in the bitcoin industry. As the Head of Development, Zhao guided the company through countless stages, helping to launch a suite of storage and analysis tools used by people and companies across the globe. Anyone who uses Blockchain’s hugely popular API, charts and statistics tools have Zhao and his team to thank. So when someone like Zhao leaves a clearly successful project like Blockchain for a relatively small Chinese exchange like OKCoin, it’s worth paying attention.

Often seen as coming in a distant third in the race to become the dominant Chinese cryptocurrency exchange, OKCoin has emerged from the Chinese “bitcoin banking ban” in relatively good shape. The company has picked up considerable business in recent months, gained over $10 million in investment this year, hinted at plans to lease its trading platform to other regional exchanges, and may even play a role in the potential resurrection of Mt.Gox. With Zhao on board as Chief Technical Officer, OKCoin may well become a significant bitcoin force in Asia.

Speaking with CoinDesk, Zhao claimed that the decision to join OKCoin was an easy one:

OKCoin is a young, energetic and truly professional company with tons of potential. I am confident OKCoin is, or will become, one of the iconic companies in the bitcoin space, globally. And I want to be part of that process and contribute to it. There is strong alignment. The decision basically came down to future potential of the company.”

According to the CoinDesk report, Zhao is leaving Blockchain on good terms, saying “Blockchain is one of the most inspirational companies I have ever had the pleasure to work with.”