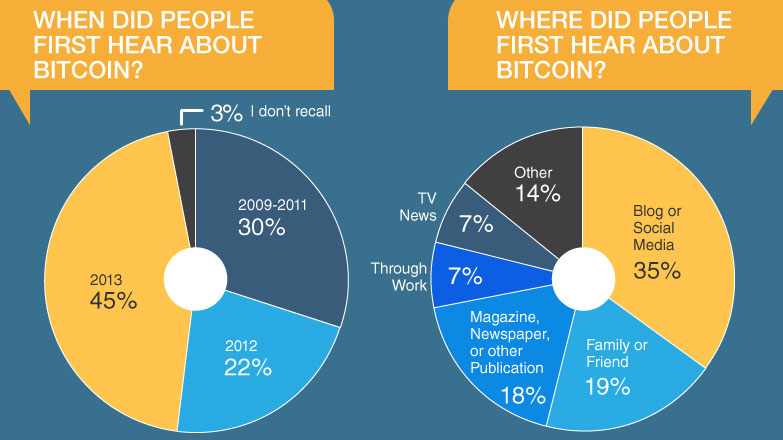 Report: Wall Street and Silicon Valley are bullish on bitcoin If the results of a new survey published by the Bitcoin Investment Trust (BIT) are to be believed, Wall Street and Silicon Valley investors are extremely optimistic about the future of bitcoin as both a financial tool and investment opportunity. The survey was backed by BIT’s parent company, SecondMarket, and responded to by a pool of 1,000 professionals in the investment, technology and bitcoin communities.

The survey found that the majority of respondents (45%) were relative newcomers to bitcoin, having only learned about the cryptocurrency in 2013. (There did not appear to be a 2014 option.) Most people initially learned about bitcoin through online media (35%) or friends and family (19%). Only a minority (7%) learned about it through television news.

The survey also claims that 68% of those who learned about bitcoin had positive views or believed it would solve a real-world problem. The survey found that 74% those questioned believed that bitcoin would eventually become a viable alternative currency.

Tellingly, 66% of those surveyed planned to purchase bitcoins in 2014.

While interesting, the survey’s results should be taken with a grain of salt. The survey does not cite its methodology, does not include the full results of survey questions and responses, and the results do not appear to be independently verified. With such a small number of respondents pulled from an already bitcoin-targeted demographic, the results do not represent the general sentiment among the Silicon Valley or Wall Street demographics. BIT is aware of this, noting in the survey’s footnotes that “Due to selection bias, survey respondents are more likely than the general populace to be bullish on bitcoin.” As such, it is best viewed as a potentially informative work of marketing, rather than as a meaningful demographic analysis.