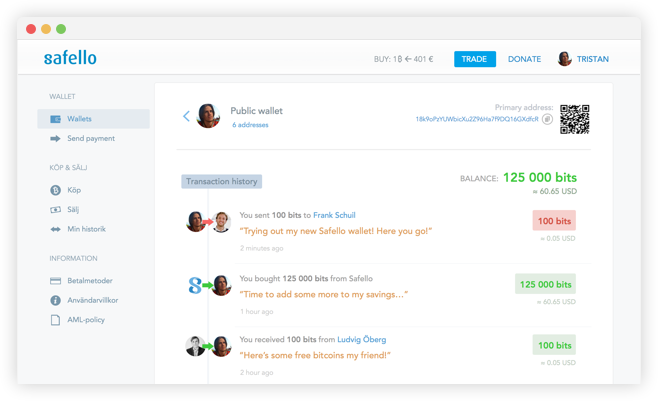 Even for experienced users, bitcoin wallets can be a headache. Although QR code readers and BIP-70 integrations have helped sand some of the rougher edges off some modern wallet programs, particularly in the mobile market, bitcoin wallets can still be counterintuitive programs for new users to learn. The first company to make a truly user-friendly bitcoin wallet could well become a true breakout success in the cryptocurrency world. Safello, the would-be “Coinbase of Europe,” has turned to social-media concepts in their attempt to create the first bitcoin wallet with mass appeal.

The wallet, currently in invite-only beta testing, claims to be “so easy that even your mom could use it.” Built around a user-interface that bears a distinct similarity to both PayPal’s new layout and social-media services like Twitter and Facebook, the wallet is extremely friendly in design. The system strongly encourages the use of verified accounts, giving an added layer of protection against the “scams and impersonations” that have become common concerns for all online financial transactions. Additionally, the Safello wallet pulls user images into the wallet, seemingly connecting with exiting social media accounts, making it easier to send bitcoin to the right person or company.

For a casual or new bitcoin user, the Safello wallet looks truly simple and easy to use. Should it work in practice, it could perhaps be a serious rival to the similarly designed Circle system. Unlike Circle, however, the Safello wallet isn’t a hosted service, and is instead tied to the Blockchain.info API. This allows users to control their own private keys, rather than entrusting them to a third-party service.

Experienced bitcoiners should, of course, be skeptical of these claims. It’s one thing to create great-looking promotional images built around an ideal interaction, but real-world interactions aren’t always so clean and perfect. The most obvious issue is that many bitcoin users won’t be using the Safello on both sides of the transaction, meaning that a standard use case will be a friendly UI that is still sending BTC to a cryptic-looking string of characters in a public address. What’s more, many current bitcoin users prefer the pseudo-anonymity of the system, and may actively avoid connecting their social media accounts to the service.