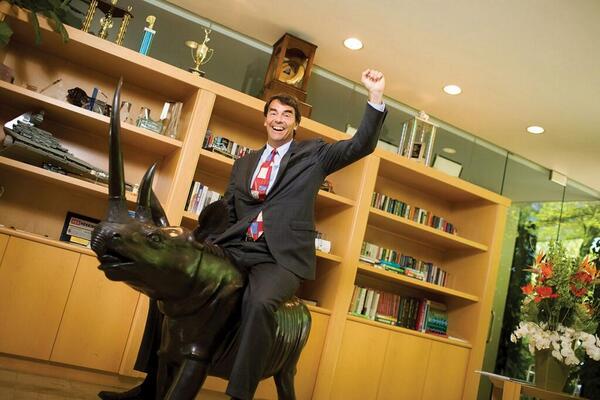 In an interview with CoinDesk published today, venture capitalist and Silk Road auction winner Tim Draper had some very bullish things to say about the price of bitcoin. “I guess the markets aren’t seeing what I am seeing,” Draper said. “An entire economy is being rebuilt. I have a price target of $10,000 in three years. Even that may be pessimistic.”

It’s hardly shocking that Draper is bullish on bitcoin in the long term. Only a few months ago, Draper’s bid for the roughly 30,000 BTC seized from the Silk Road was high enough to shut out all other bidders. Although the amount Draper paid for those bitcoins is unknown, many analysts have guessed that he paid at least the then-going rate of $650, or roughly $19.5 million. What is more surprising, perhaps, is that Draper is still exceptionally positive about bitcoin’s price even as his investment has lost around $5 million in market value.

Draper didn’t address why he believes bitcoin’s rise will be so dramatic, but he did say that he sees big potential in his investments with bitcoin companies like BitPagos, Korbit and Volabit. Along with his son, Adam Draper of increasingly bitcoin-focused venture capital fund Boost.vc, Tim Draper is rapidly becoming a major contributor to the “rebuilt” economy he sees taking shape.

What’s the key to bitcoin’s success in his view? “I assume anyone who used to send money through Western Union already is familiar with how much they can save using bitcoin,” Draper told CoinDesk. “My thinking is that bitcoin is here to stay.”