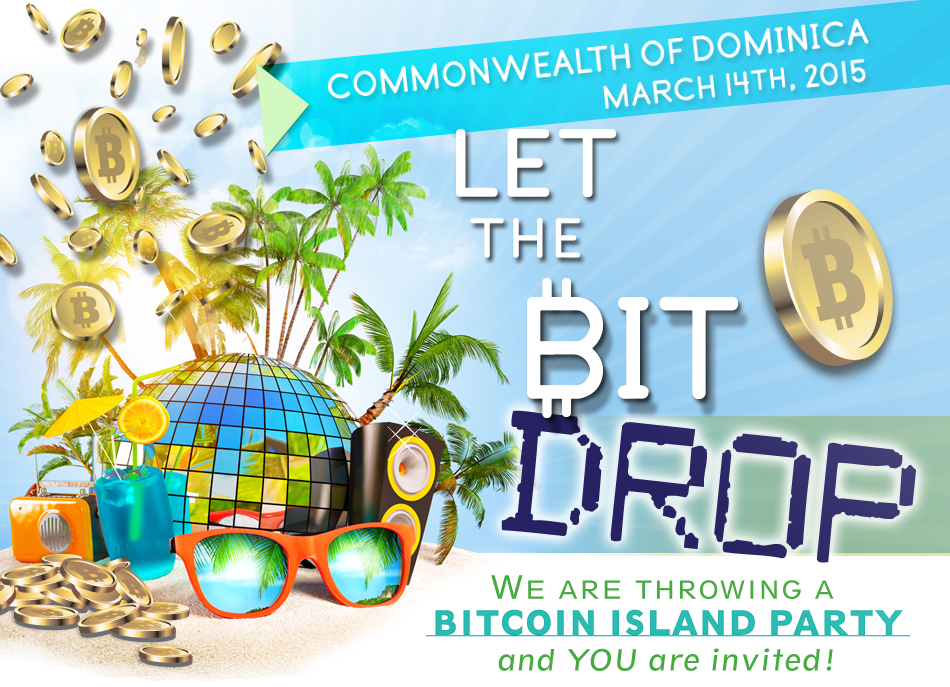 Tiny Caribbean nation of Dominica may become a bitcoin-business haven Could the tiny island nation of Dominica, population 71,293, become the engine for bitcoin adoption on the Caribbean? If Coinapult and its partners have their way, that’s exactly what will happen in the Lesser Antilles tourist hotspot. The bitcoin payment processor will be distributing small amount of bitcoin (the exact amount is unannounced) to the entire population in an event called “The Bit Drop.”

Scheduled for March 14th, 2015, the Bit Drop is planned as an “island-wide party” featuring a series of events with celebrities, musicians and bitcoin supporters. The event is also timed to coincide with Pi Day, a celebration of the mathematical constant π (3.1415 … a good match for 3/14/15).

In an interview with regional newspaper PanAmPost, Coinapult CEO Ira Miller said that the event’s sole objective is to increase bitcoin adoption in Dominica, and more broadly to the greater economy of the Caribbean and Latin America.

“We are going to create tens of thousands of new bitcoin users overnight,” Miller said. “Of course, we hope that these people enjoy and continue to use bitcoin, and that the project provides proof of concept to similar communities all around the world. We want a thousand Bit Drops.”

In addition to Coinapult, the event is sponsored by Aspen Assurance, Bitcoin Beauties, and the College Cryptocurrency Network (CCN). Local authorities in Dominica have given their blessing and support to the Bit Drop, seeing the event as a kind of economic stimulus for island. The Bit Drop will also include opportunities for Dominican retailers to learn about the benefits of bitcoin adoption.