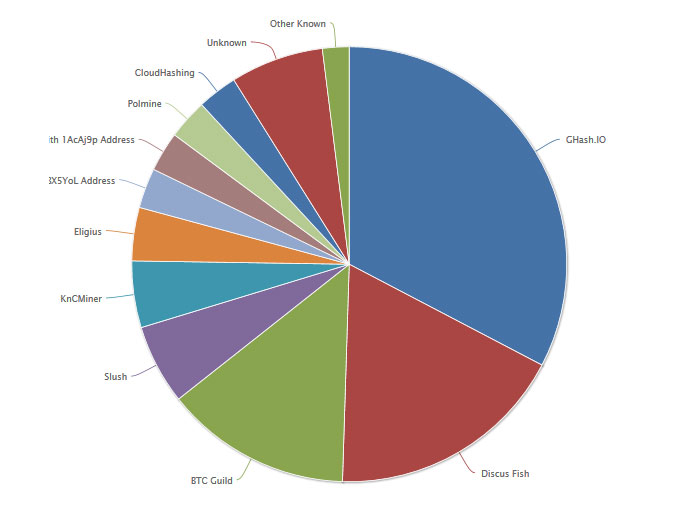 Last week, a single mining pool, GHash.io, briefly gained over 51% of the hashing power of the entire network. Although several core developers have claimed that a true 51% attack is extremely unlikely, and that the centralization of mining power isn’t the huge problem it has been presented as, this did little to slow the wave of panic across the bitcoin community. While bitcoin’s price was dropping, however, a small group of armchair analysts decided it was time to take action. They might not be able to decrease GHash.io’s hashpower, but they could at least clear up the mystery of the “unknown” pool.

The major reporting tool for pool size is Blockchain.info’s Hashrate Distribution page, a simple pie chart that is easily shared and embedded via API. As more mining pools have come online in recent months, however, that chart hasn’t been able to keep pace. As a result, “unknown” pools are simply lumped together, giving the impression that as much as 35% of the network’s hashing power was completely hidden from examination.

The worry is that a big pool might be able to obscure its real hashing power simply by temporarily redirecting to an “unknown” pool. While a pool might report as having only, say, 40% of the network hashpower, in reality it could have well more than 51% without most people being aware of that fact. To solve the problem, some of those unknown pools needed to be identified.

Thankfully, the Blockchain chart’s tagging module, which allows various pools to be identified, allows user contributions via GitHub. Over the past several days, a much clearer picture of the number and power of various pools has emerged. Once lost in the “unknown” pool haze, smaller pools like Polmine, CloudHashing and KnCMiner now display on the chart.

As much as 8% of the hashrate distribution is still “unknown,” and several smaller pools are known only by their addresses.