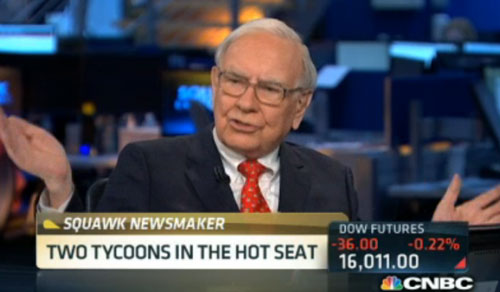 Speaking on CNBCs’s Squawk Box today, investment legend Warren Buffett warned investors to “stay away” from bitcoin, and claimed that the cryptocurrency was little more than a “mirage.” Buffett’s comments came in response to a question posed by Quicken Loans founder and chairman Dan Gilbert, who noted that bitcoin was the “big two-syllable word that everyone was talking about” at a recent conference.

The comments came out of a discussion about the fallout from the 2008 financial crisis that was largely the impetus for the creation of bitcoin. Buffett referred to that era as an “economic Pearl Harbor,” and noted that if U.S. policy makers hadn’t stepped in so swiftly to prop up investments the result would have been a total shutdown of the economy. The crash was driven by rampant speculation on future returns on questionable home loans by the banking industry, and many banks would have failed had the U.S. government not stepped in to provide emergency loans from tax payers.

This prompted Gilbert to ask “If we had all been using bitcoin in 2008, would this all have been different?”

Buffett didn’t actually address this question, instead dismissing bitcoin as a simple payment protocol with no intrinsic value. Buffett also didn’t respond to comments that bitcoin is fundamentally a public ledger, not a payment system, and seemed surprisingly dismissive of the value of providing high-volume, near-zero cost transactions at speeds exponentially faster than anything currently available on the private market. In fact, Buffett seems to think that bitcoin only applies to U.S. transactions, rather than international ones.

Even more interestingly, however, was the lack of discussion about bitcoin in the next topic the panel covered, the rising economic instability in Ukraine and China. Tellingly, both countries are becoming major hubs of activity for bitcoin trade.