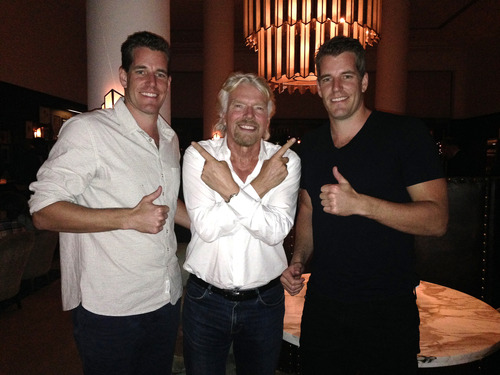 The Winklevii and Sir Richard Branson, from their blog post announcing their ticket purchase.

The Winklevii in space? According to a recent post on the Winklevoss Capital company blog, the twins have spent a healthy chunk of their Bitcoin reserves to buy two tickets on Sir Richard Branson’s Virgin Galactic space tourism experience.

Cameron and I have decided to use our bitcoin to take the plunge, or rather propulsion, into space. Why? Because Bitcoin and Sir Richard Branson’s Virgin Galactic are two technologies that meaningfully represent our focus at Winklevoss Capital – the reduction of pain-points and friction in an effort to build a better world.

The first round Virgin Galactic flights are scheduled for later this year, and there’s already a 700 person long waiting list. With a ticket price of $250,000, it’s also an extremely exclusive list. With an estimated 1% of all Bitcoins in their wallets, however, the Winklevoss twins can afford it.

It’s no secret that Cameron and Tyler Winklevoss are big believers in Bitcoin. The twins may have first become well known thanks to their 2004 claim that Mark Zuckerberg ripped off their idea for what became Facebook, but in recent years they’ve become two of the highest profile Bitcoin venture capitalists on the public sphere. Last month, the brothers filed amended SEC documents for their Bitcoin-based investment fund, and also launched the Winkdex Bitcoin index.