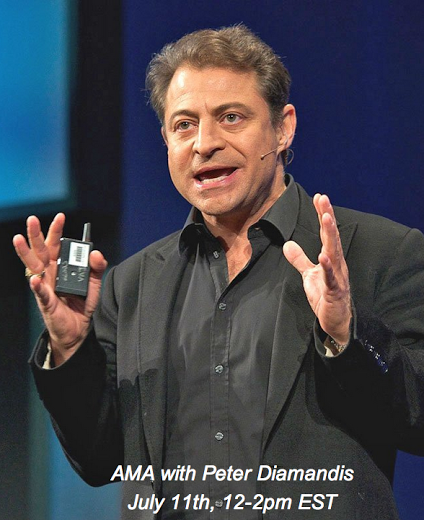 X-Prize founder Peter Diamandis on bitcoin: “You do the math” Peter Diamandis may be best known as the creator of the X-Prize Foundation, but the MIT and Harvard educated entrepreneur has recently been making a name for himself as a bitcoin advocate. While participating in a Reddit Ask Me Anything (AMA) today, Diamandis plainly stated his view on bitcoin’s future.

Regarding bitcoin, in success, it will become the predominant means of financial transaction for not only the developed world but the developing world, the group I call the rising billion. Remember that 3 billion new people are coming online this next decade who do not have access to credit cards or banks. Bitcoin is their method to transact. These 3 billion people represent tens of trillions of dollars that will flow into the global economy. Given that there are only 21 million bitcoins, you do the math.

Although not as price specific as some other recent comments by bitcoin insiders, it’s clear that Diamandis has bullish expectations for bitcoin in the coming years.

The sentiment is not exactly surprising from Diamandis. Last month, the self-described “libertarian capitalist” published a prediction on his Google Plus blog claiming that bitcoin was entering into a “disruptive phase,” and projecting a 1-to-2 year timeline for mass adoption of bitcoin.